The thing that influenced me most about coming to Curieuse was the prospect of contributing to important research on the critically endangered hawksbill turtles. I had done my research on GVI before coming and was really looking forward to helping an important conservation programme; however I was unsure about exactly what data is collected, how and why. 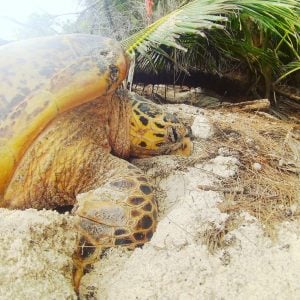 Almost every day involves a beach patrol, which will include visiting one or two of the eight beaches to investigate whether there has been any new turtle activity, which includes any tracks, body pits, egg chambers and nests. This is mostly done during peak nesting season (October- January) and contributes to information about the nesting hawksbill population across the island. Everyone’s favourite beach to visit is Grand Anse which sees over 80% of turtle nesting activity. Seeing a turtle nesting for the first time was one of the most exciting things I have ever seen. One of my favourite days was seeing two turtles nesting at the same time on Grand Anse. We found both within 20 metres of each other and at a similar stage in making an egg chamber. The turtle closest to nesting was worked first; the track width is measured, location on the beach and time is noted. When the turtle appears to have almost finished digging the egg chamber, we prepare to count the eggs by lying behind the turtle and making sure we have a view of the eggs being laid. The turtle carapace is also measured and we triangulate the position of the nest to ensure we can find its accurate location in 70 days time. We also check if the turtle is tagged and take a skin sample if needed.

Watching a turtle nest is extraordinary, she goes into a type of trance which allows us to measure her and count her eggs without disturbing her. After laying her eggs she will go on to camouflage the nest by covering the egg chamber and distributing the sand over her body pit to make the location of the nest unnoticeable. Some will take over an hour to do this and it is really cool to see how thorough they are in trying to protect their eggs from any predators. Turtles will not always lay their eggs on their first attempt, some will make multiple body pits or egg chambers and still decide not to nest and return to the ocean. 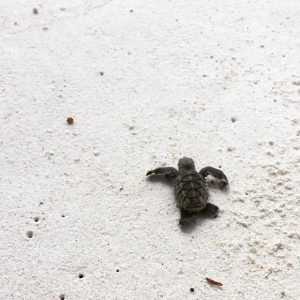 After 60 days of incubation the turtle hatchlings should be ready to leave the nest. After 70 days we return to marked nests to undergo an excavation. We use the triangulation markers and measurements to find the nest. Once the position is found we then dig to hopefully uncover the empty egg shells, which is a sign of a successful nest that has had healthy hatchlings. In order to identify the success rate of a nest we count how many eggs there are note whether they are hatched or what state they are at. I have so far helped with several excavations, most of which have been successful although there have been eggs found at different stages; some are predated or undeveloped with some nests still having a hatchling within it. It is very sad to see any predated, undeveloped or dead turtles in a nest; only one out of 1,000 hatchlings will survive to adulthood. Despite this it was amazing to see a stage 3 (hatchling which is larger than yolk sack) albino hatchling, with its whole body a beautiful cream colour. I have unfortunately seen a nest with 150 undeveloped eggs, which is the most unsuccessful nest I have seen.

My favourite thing about excavations has to be seeing a healthy hatchling make its way to the sea, which is extremely cute. Although some are stronger than others, most often they will find their way. I find it fascinating to watch and amazing that they know exactly which way to go and know exactly where they need to be to survive. I am yet to witness a full nest hatch all at once, which I really hope to see before I leave.