The Bigger Picture - Helping the community of Moturiki, Fiji

Caqalai island life puts you in the position where you are almost completely disconnected from the rest of the world. Coming here changes you and gives you a pair of new eyes to see the world with. Every day is a busy day filled with diving, meeting new people, surveying, learning new things and performing community work which sometimes makes you lose track of the bigger picture. This is one of the reasons why GVI interns are given an assignment to reconnect with the outside world and to figure out what role we have as GVI volunteers and how our hard work actually fit in to the bigger picture.

One of GVI’s objectives and our common goal is so help the community on Moturiki, the island next to Caqalai, to live sustainable and in symbiosis with the surrounding ocean. We do this by surveying the area and collecting data about the reefs in order to share this with them and teach them how to do it themselves. Saving water is also very important which we do by building compost toilets. We held fundraisers to collect money to help support building pipelines to connect Moturiki with a mains water supply. Education plays another important key role which is why we visit the schools of Moturiki to teach the children all about their surroundings and marine life, as well as good health and sanitation in a fun and creative way. 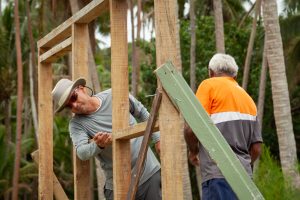 GVI as a social enterprise plays an important role in helping the more remote areas which are out of reach for the government. As a social enterprise, it is our responsibility to communicate with the higher organisations such as the FLMMA (Fiji Locally marine managed areas) and the private sectors on behalf of the stakeholders (those with ownership of the land) and local communities. We are also in contact with the ministry of iTaukei (Fijian) Affaires which is responsible for the preservation of Fijian culture and for the economic and social development of indigenous Fijians. They also form the connection between the Fijians and outside parties but also form an opportunity for the villages to express their concerns to the government. With that said, you can say with certainty that we’re not only here for the diving and marine data collection. We are a part of a social enterprise that creates opportunities for communities, such as those on Moturiki, to be heard and develop. And to have lots and lots of fun of course!