The Republic of Fiji, a fisherman’s oasis and a mountaineer’s sanctuary, home to some of the world’s most gorgeous landscapes and friendliest people, and where we can find one of the clearest examples of human-ocean-dependency.

With a vast majority of the country’s population inhabiting the coasts of 110 of the 332 islands, Fiji is a prime example of the services that coral reefs provide to many communities around the world. Whether it be for food and protein supply, income and livelihoods or simply coastal protection, the health of coral reefs ultimately determines the success of surrounding populations. Hereby, reef studies are essential for Fiji because reefs are of vital importance both ecologically and economically but are threatened because of rapid economic and population growth.

It is becoming increasingly important that the rate of development across the islands is managed in a sustainable way so that, in a growing population that is still heavily reliant on marine resources for livelihoods and economic stability, resource security is guaranteed alongside the maintenance of the vast Fijian marine biodiversity. 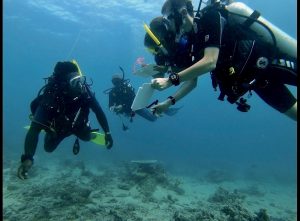 Three depth ranges are surveyed at each site; 0-3m, 3-5m and 8-10m, with a total of 5 transects completed at each depth range (i.e. replicates). Each transect represents a random sample, and for all biotic parameters being assessed an average of the five repeats would be taken for statistical analyses: percentage benthic coverage, fish abundance, size, etc. and invertebrate abundance and diversity.

All GVI surveys are conducted in 4-person teams each with an individual role;

All surveyors operate in buddy pairs and use the same transect line for the survey, although data collection techniques vary slightly. 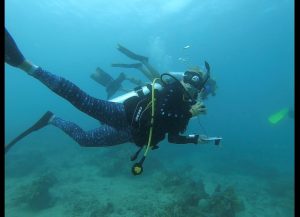 The long-term monitoring of coral reef health is the core aspect of the GVI Caqalai Marine & Community Conservation project and is adapted from different methods widely utilised for community-lead resource management, both in Fiji and internationally, one of the long term objectives is to present our data periodically to FLMMA, the YMST and the communities of Moturiki to allow them to see trends in the abundance of the target species over time. In addition to work towards creating four locally managed no-take zones (tabus) around Moturiki as the long-term objective of the community-based resource management plan and in keeping with the GVI core objective of securing food security for the communities of Moturiki into the future

The evidence of the support that GVI has been giving to the inhabitants of Moturiki for the last 5 years has been embodied in 2019 with the recognition of GVI Caqalai as the 11th village of Moturiki. Throughout the work realized in Caqalai research base, the local communities on Moturiki receive a scientific baseline on the state of Caqalai’s pristine coral reefs which can then be used as a model to sustainably manage and utilize the marine resources for the 10 villages. This has been a massive inspiration to GVI staff and volunteers and demonstrates our commitment to helping the local communities to secure their marine resources for protein and livelihoods alongside the maintenance of marine biodiversity.

We wish for the continuity of the reef monitoring project around Caqalai for many years to allow contributing such valuable data for the local communities over on Moturiki Island. With the data collected, we can better aid the needs for a sustainable asset towards marine resources, provide with a better understanding to the communities on the importance of monitoring their coral reefs to ensure sustainable practices that will benefit the presence and resilience of their marine resources now and into the future.

Learn more about our Marine conservation expedition in Fiji.  You too can help monitor reefs and support the research of our partners in Fiji.