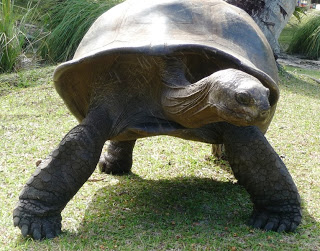 I’ve been on Curieuse Island, Seychelles with GVI for over six weeks now as a volunteer embarking on the internship programme in marine and terrestrial island conservation, which has been an incredible experience. So far, I have taken part in several surveys that have really given me essential skills in the field and also a leadership course which has taught me how to lead groups of volunteers on trails, surveys and hikes around many parts of the island. The island is absolutely stunning with a huge diversity of tropical sea life, skinks and geckos, critically endangered birds such as Flycatchers, vulnerable reptiles such as the Aldabra Giant Tortoise and endemic plant species such as red mangroves. My favourite survey has been monitoring tortoise hatchlings and the tortoise census at the Rangers Station as these are the animals that I’m fascinated with. This is why I chose to study this subject for my final Zoology undergraduate project titled ‘how does spatial distribution of Aldabra Giant Tortoises Aldabrachelys Gigantea and their habitat relate to ecology, infrastructure and human activity on Seychelles island of Curieuse?’.

A. gigantea are natural bioengineers as they play an important role in seed dispersal and soil fertility through nutrient decomposition on Curiuese and other islands in Seychelles. Unfortunately, they are currently classified as vulnerable on the IUCN Red List of threatened species (Gerlach et al., 2013). Aldabra Giant Tortoises used to exist commonly throughout the Western Indian Ocean however, in 1840 they were overexploited by trade and predation. After 1916 they have successfully increased in population size by recent estimates of 100,000 (Palkovacs et al., 2003). It is widely believed that A. gigantea originated from the Aldabra atoll but lack of vegetation and environmental pressures, such as rise in sea levels, made it challenging for them to survive on this coralline oceanic island. Between 1978 and 1982 tortoises were relocated onto other islands around the Seychelles including Curieuse (Stoddart et al. 1979; Stoddart et al., 1982).  250 were reintroduced there but only 112 survived due to feral predators such as rats (Hambler 1994).  Eco tourism has played an important part in conservation awareness in many of the islands helping to decrease rat predation of the eggs of tortoises and indigenous birds. However, Curieuse is still poor in prevention measures and black rats Rattus rattus have reinvaded (Rocamora, 2019). This is an issue for new tortoise populations making it difficult for them to flourish on this island. Curieuse are currently using a rat eradication programme in order to reduce their population size. With the help of staff and volunteers, rat traps have been monitored closely and from the beginning of this year they have successfully killed approximately 260 at GVI base which is incredible news for conservation efforts here on Curieuse!

Leading volunteers to several surveys such as the tortoise census and my own personal project for my undergraduate project data collection has been really exciting.  My project involves using my own GPS device and locating tortoises surrounding the rangers station whilst measuring air temperature, precipitation, cloud cover, human activity and habitat selection. I have led and conducted over 30 surveys which have given me enough data to analysis for my thesis. This whole experience has not only brought up my confidence with  teaching volunteers the importance of island conservation but also it has given me the drive and skills to further my career in working in conservation. It has always been a passion for me to work with endemic species in Seychelles and so I would love to visit again and hopefully fulfill a career in wildlife conservation.