Song kran is one of the biggest festivals in Thailand. It represents the New Year and happens every year between the 13th-15th April; following the lunar calendar similar to that of many Asian countries. The festival traditionally involves people pouring water over family members, friends etc. washing away the last year and blessing the new one. Song kran nowadays, however, has morphed into what is known as the largest water fight in the world. Thousands of people travel to Thailand for Song kran in order to get involved in one of the most fun festivals that you can attend! And Chiang Mai is known as one of the best places to celebrate. 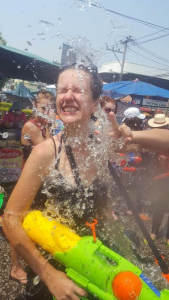 The Chiang Mai hub closed down project during the week of Song kran, so that everyone could enjoy the festival together. The streets of Chiang Mai become lined with stalls selling various grades of water-guns; from small one handed pistols that squirt a tiny bit of water, to the huge canons that need to be held with two hands and can literally knock people over (well, not literally).

After everyone has their chosen weapon, the streets erupt into a city wide water fight with locals and tourists alike. It’s impossible to walk anywhere without being squirted with a water pistol or drenched with a whole bucket of water! But it’s all in good fun, with everybody laughing and joking as they shoot at passing cars and the groups of people that fill the roads and back streets, and enjoy the music from the stages around the city centre. This time of year also allows locals to showcase more of their traditional culture to larger numbers of people; many stalls sell traditional handicrafts, stages have traditional performances, and there is a large parade which moves through the city. 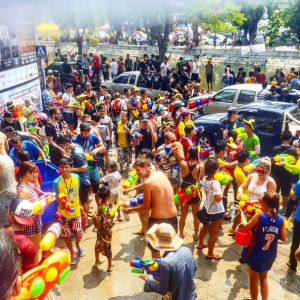 The heart of our festival you’ll find all GVI’s volunteers.

This is an experience that people remember for the rest of their lives, and showcases the fun side of modern Thai culture, as well as giving people the chance to learn about a tradition that is still important in this country. Everybody loved the festival, with some already planning their next trip to Song kran! We’d love to see more people take part next year, so maybe consider travelling to Thailand and celebrating the New Year in style.