Day 40 at the Curieuse Base for the volunteers that arrived in late June. A new group of volunteers has arrived last week and is slowly getting used to the island life. As one of the old ones, I enjoy feeling like a wise old man, being able to answer a lot of questions: Knowing all the hikes and surveys, the ways of measuring a tortoise or how to set up the sharking nets.
Still, Curieuse never fails to surprise. You might get used to living here, might get used to the ways of surveys, seeing a tortoise will eventually become an everyday thing (not to say it gets boring though!), there will always be new secrets of the island to be discovered…

Last Sunday, the GVI Base had a huge success to celebrate. An Intern (Happy Birthday by the way, Josh!) had set up a survey to prove the existence of Seychelles Mud Terrapins on Curieuse Island, following the suspicions of one of the staff members. For two weeks tons of sweat and smashed invasive snails (a terrapin’s favourite food) were sacrificed in a huge effort; traps were set up that then had to be checked at least twice a day to make sure to not accidentally trap a terrapin (or any bycatch – there were a lot of eels) for too long, causing any damage; some days that would mean our current hero of camp waking up long before sunrise, tumbling through the swamps in the dark only to find fish or worse: Hints of the presence of a vagrant and elusive chicken.

With only one week to go to finish the project, the big catch was made when it was least expected! Usually the weekends are free for the volunteers, giving us time to go exploring on our own or relax and recharge for the next week of hard work. Still, the terrapin traps needed to be checked, so we went out as a two people team, not thinking this could actually be the day – I didn’t even bother taking my wetshoes with me. When we arrived at the trap-site though, we could not believe our eyes. We really got one! We measured, sex classified, and weighed the specimen, but with our lack of experience and in the excitement of the moment, neither of us was sure if it was a Seychelles Black Mud Terrapin or a Seychelles Yellow-bellied Mud Terrapin. In the moment this did not really matter to, for it was the first time a terrapin of any kind had been caught on Curieuse at all. Having written down all the data and having taken photos of its plastron, carapace, and sides, we released our little friend (now named Gilbert) back into his home swamp, of course making sure he looked ok for his first few meters of freedom. Little Gilbert luckily seemed to have no problems returning to his normal life though, so we collected our stuff, left the scene and made our way back to camp were we excitedly began to scan through guides to fully ID him.

After a bit of research we were then able to actually classify him as a Seychelles Yellow-bellied Mud Terrapin, a highly endangered species of which up to now only 115 are believed to live in the wild.
Add at least one more on Curieuse to that number! Only one day later we got lucky again and were able to take the data of a second terrapin of the same species, this time a female!

A day after that we sadly found no new terrapins, but while trying to catch some juvenile sickle-fin lemon sharks, in order to collect data on the population in Baie Lariae, a hammerhead youngster made his way into our nets; again a catch no one would have expected! And again, we took him through our procedure, weighed, measured, took a DNA sample and released him back into the wild.

With stuff like this happening, you just never get really used to the island and I promise you will never get bored of it. It feels unbelievable being part of these projects here, making new discoveries and helping to conserve an environment that has so much to offer. 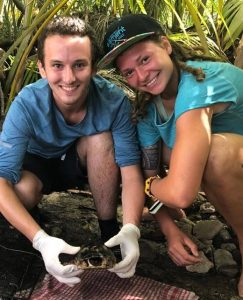 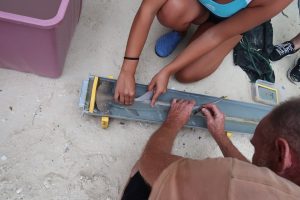