The Other Creatures of Curieuse 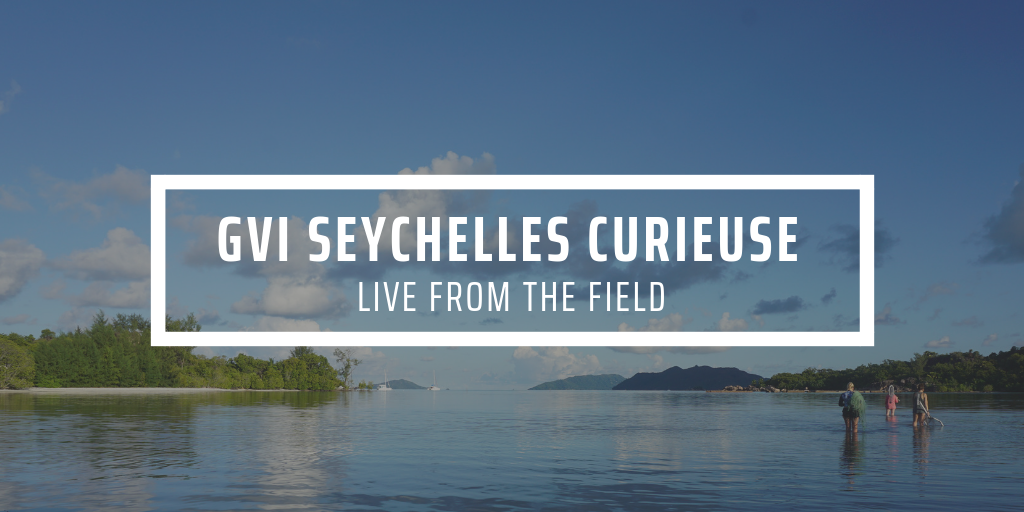 I’m sure the people that have gone before me on “blog duty” have all explained how life on the island works, and all of the amazing things you can do here, perhaps they have mentioned some of the animals that roam these lands, but I’m sure they haven’t mentioned the other creatures of Curieuse, the humans.

Most of the specimen found on the island come from a small island just north of Europe, England. As a Colombian, this is a species that is quite exotic and rare, so I’ve done my best to observe them quietly, and I have made a few observations on their behavior outside of their natural habitat. Each individual seems to have its own way of speaking, which they all seem to be able to identify but to be honest it all sounds the same to me, I can only describe their communication efforts as “fancy English”. I am yet to discover the origins or the purpose of such strange behavior, but my best guess is that it has something to do with their mating rituals, although I am unsure of what potential mates would look for. Perhaps the weather on their island has affected them somehow. All of them are friendly, and are quite surprised at my ability to move around the terrain on the island, an ability I assumed their height would grant them as well. I will need to have more experience with the original population in Europe to understand how their behavior changes when placed on a tropical island like this, but I have noticed they seem particularly bothered by the humidity, and some are surprised by the pattern of the sun, as sunsets and sunrises really fluctuate in their native island. What has surprised me the most is their ability to adapt, I assumed when I embarked on this journey that the ones that lived in the countryside would have no trouble on the island while those that lived in larger cities or town would struggle, but I haven’t yet noticed any differences in their abilities that could be derived from their natural environment. Conversations between the also seem to take longer to get started than the ones I am used to, perhaps a side effect of their “fancy English”.

Another subspecies of humans I have encountered are the locals from down under. I have only heard myths and legends about the people of Australia, hearing that they drank water from their shoe, but I have encountered no such behaviors. Their accent is quite similar to that of the English, my guess is that it comes from the early colonization of the continent by the English. However, although the accent is similar, their expressions vary. When you help an Australian, you are often rewarded with a “cheers” rather than the “thank you” you would get from an English. When thanking them, you usually get a “that’s alright” instead of a silent smile the common Englishman would give. They are better acclimatized to the island, and seem a bit more expressive than the English. In terms of their physical characteristics, I see no notable differences, but I would like to sample a larger quantity of Australian specimen before I can draw conclusive results.

I have had rare citing of the sub species of German origin, but I have noticed that they are not that different to any of the other species. They have a different language to communicate, but fare quite well with English as well, and I have noticed that they are particularly interested in the local fauna, specifically the Seychelles skink, which I am yet to understand.

A more complete paper should be published once I have spent more time on the island, and hopefully surveyed even more specimen from each species, but I can so far conclude that we may all come from different places, but we all come from one same planet, which really needs our help. Perhaps it’s time to put our differences apart so we can make a difference in the world.