Surprises as a daily routine in Jalova.

After three months in Jalova, it starts feeling like home. You’ve adopted some ‘jungle routines’ and become less suspecting when capuchins drops fruits on the roofing of the dining room. More often than not however, the next day will have surprises lurking around the corner. Every time this happens you are reminded that your home is now a magical place. Not that long ago, I experienced such a day.

The sun had heated up the air rather soon. I recon the four other volunteers and staff member thus embraced the cool breeze on the canoe just as much as I did. We were searching for canal birds on Aguas Negras, one of the canals in Tortuguero NP. The bare-throated heron, little blue heron and the usual amount of Northern Jacanas had already passed the scope of our binoculars when we heard a froglike noise. Not that unusual in the tropical rainforest you might say, but this particular sound came from high up in the canopy. Since we were all trained to recognize these calls, we knew what to look for. The keel-billed toucan, one of the most colorful big birds we find in Tortuguero. Harder to find than you might think, with foggy  binoculars on a wobbling canoe.

This sighting gave the whole crew enough energy to power through some thick floating vegetation, in the hope of challenging our spotting skills a little more. Alas, ‘only’ some more Northern Jacanas. You learn to appreciate the small things in live here, uhum. Actually.. you truly do! After this display of physical greatness we agreed on enjoying a silent moment on the boat. A nice change from basecamp, with always interesting people to talk to, games to play or work to complete, mostly pleasant sometimes less. The sun was now much more enjoyable while we heard the songs of many other birds we are not able to distinguish just yet. Our stomachs joined in, telling us it was time to head back to base. Dinner would be waiting for us, I hope the other volunteers had enough creativity to come up with something else then rice and beans.  ♪♫ Row, row, row the boat.. ♪♫.

The surprise of this day could not have chosen a better time. One of the volunteers saw two medium-sized herons disturbing the otherwise calm river banks. Definetly worth investigating. With nearly expert level steermanship, the staff member directed the canoe towards the subjects of interest. Obviously shy, but not too scared to remain in sight, a boat-billed heron was so kind to enlighten our day even more. The stomachs were silenced and would not complain about rice and beans a tiny bit. The boat-billed heron is one of the most charismatic herons, but does not show himself all too often. He usually uses his characteristic bill at night to scoop his prey out of the water, quite unusual for a heron. This heron is now also known to put smiles on our faces, at least until the next day in Jalova, with other things in stall for us. 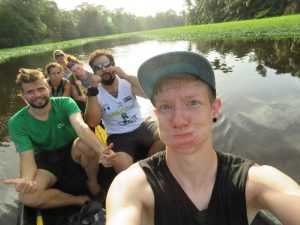