Start as you mean to go on.

On my first survey day on Curieuse Island I was told I would be off to Grand Anse to do a turtle survey, now Grand Anse is pretty far away from base and if you’re a nesting Hawksbill turtle it is the place to be. It’s like the Viper rooms in LA, all the coolest turtles nest there. Because of this we were going to be in the field at lunch time so we made ourselves sandwiches with the rolls which are baked fresh every day here (I know we’re lucky) The Idea was for each of u to carry our lunch in our bags but I noticed the bread bin would easily fit in my bag, so I selflessly decided to take the bread bin full of our lunches with us.

When we arrived on Grand Anse we began our survey, this consisted of walking along the beach and looking for any fresh turtle tracks, when we found them we noted what had happened and if there was a new nest we would try to determine where the eggs were. Then we dig down to see if we can find them. When we did we placed tags by the nest and measure the distance so we can find the nest again when it’s time to excavate. Walking along the beach we saw plenty of new activity and even some new nests which was very exciting. Now all this excitement takes its toll on a volunteer and it was soon time to tuck into our sandwiches, so I pulled the bread bin from my bag and Clare the staff member leading the survey burst out laughing. Apparently a volunteer taking the bread bin out on a survey is not GVI protocol and I was the first, and probably last to do it. 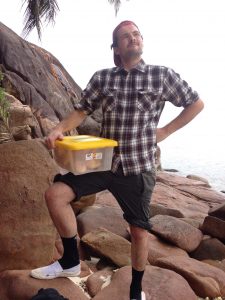 I’m sure you would agree that’s more than enough excitement for one day right?? Well we’re not done yet; as we made another sweep of the beach Clare saw a turtle emerging from the sea onto the beach. She told us to back up a good 10-20 feet and sit on a log so we could watch the turtle but not get in its way and disturb it. Well this particular turtle was unconcerned by our presence she decided to climb the beach and stop about a meter away from us, this she decided was the perfect place for her to begin building her nest. We sat quietly and watched her build a body pit with her flippers, she then dug an egg chamber with her rear flippers and began to lay her eggs. As she did this one of us counted the eggs so we could compare that figure with what we find when we excavate the nest. 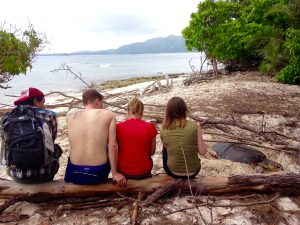 When she was done laying she started camouflaging the nest and this was our opportunity to take some measurements from her and check if she was tagged (she was!). This means GVI has encountered her before and tagged her so it was good to see she’s still surviving and laying nests. She then made her way back to the ocean rather clumsily (you would too if you’d just laid a few hundred eggs) and the whole process had only taken around 90 minutes.

Not too bad for a first day if you ask me.