What a way to watch the sunrise!

I’d never understood the lure some feel for fishing, sitting hunched in waterproofs in the early morning damp, grey gloom by a lake, a rod resting on a support with no movement from its line’s end on the water; but my first experience of ‘sharking’ on Curieuse gave me a glimpse of the delight felt by those solitary fishermen.

Our previous evening’s briefing had instructed us to meet at the kit room at 4.50 am so we could collect our share of the equipment needed to be able to catch sicklefin lemon shark pups. The pre-dawn start meant head torches were essential, the bulky kit needed to be carried on rough, rocky pathways over two hills to reach the mangrove lined bay where the shark pups spend their first few months. Once on the wooden walkway over the mangrove edge, the work-up kit was quickly assembled by some while others headed into the water to spread out the catch nets.

The water was still, the sun was just beginning to edge its way over the horizon causing the moored holiday catamarans to be silhouetted against the skyline. Grey and green backed herons called to each other as they flew low over the water heading for their preferred perches from which to join us in an early morning fishing session. Their endeavours would fill their stomachs while we were hoping to catch shark pups to measure and weigh them, and to insert electronic tags beneath their dorsal fins so they could be identified if they are re-caught in the future.

Once the holding tank had been filled with sea water and the measuring equipment laid out in a logical order on the walkway, everyone took up positions in the water, either holding the end of the catch net, feeling for a pull which would indicate a shark or fish getting caught, or holding a dip net ready to rush through the water to collect the shark pup or to free a fish if it was inadvertently caught.

When a strong pull was felt or seen on the net it was a sure indication that a shark pup had been caught, the nearest person with a dip net would rush and scoop up the pup before it got entangled and a trained member of staff would come and quickly take it out of the dip net, holding it firmly behind its gills and by its tail to help control it’s movements. As quickly as possible it was placed into the holding tank while the staff and two volunteers took up positions to ‘work-up’ the pup.

It was placed a water filled trough with a tape measure fixed along the bottom; after being scanned to check that it didn’t already have an electronic tag, one was inserted then with its nose held gently against the end of the trough, measurements were taken of its length at three different positions.

A tiny piece of fin was removed for DNA analysis, then the pup was placed in a sling to be weighed. After being returned to the trough it was flipped upside down to assess how old it might be by the amount its umbilical scar had closed, as well as to see the sex of the pup. The data was all recorded by the third helper and the pup was immediately floated gently back through the water into the bay for release, being given a gentle flick of its tail to help it back into its normal swimming rhythm as it was set free; it was watched to check that it had no problems returning to the wild. The whole process took just a few minutes.

I have been lucky enough to join the sharking sessions a few times now, some mornings the pups were caught thick and fast, other times only two or three were caught during the couple of hours we had the nets out. While we are there the sun rises and gets hot enough for sun-protection to be needed. Every time it is a joy to be out in the morning stillness, watching the beauty of the island as it awakens with the new day’s sunrays.

Then everything is packed up and we trudge hungrily back over the hills to camp, where a breakfast of hot oats or even pancakes are ready and waiting to reward our endeavors. 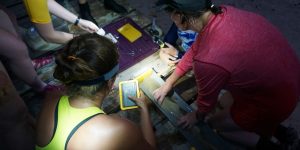