Q: How do you find the biggest Giant Tortoise on the Island? A: You don’t, instead you find a new tortoise altogether! 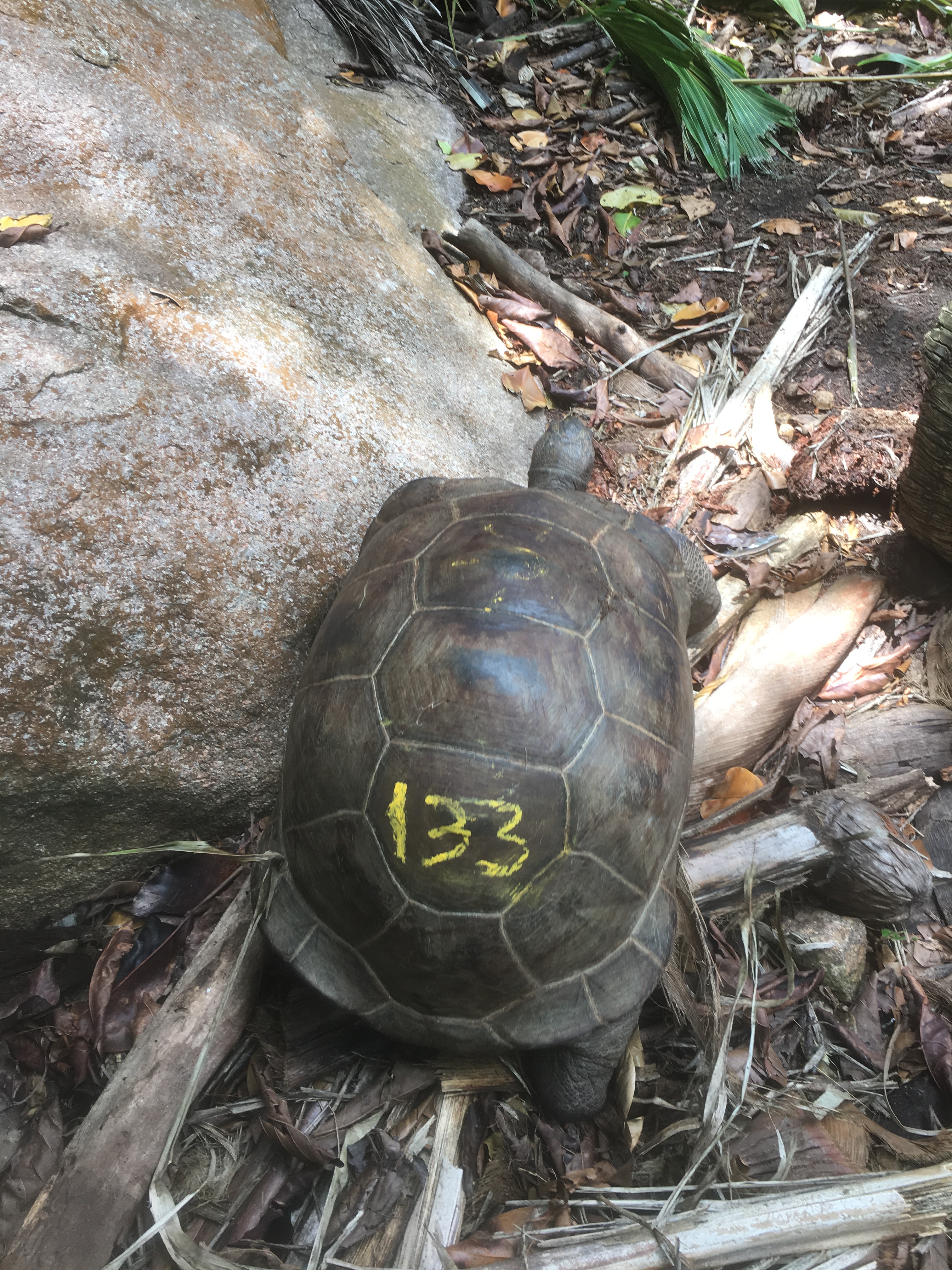 It has come to the end of the 2017 Curieuse Giant Tortoise census so the last few weeks have been busy trying to find the last few tortoises still unaccounted for.  One major focus of these searches has been the hunt for MacGregor, the biggest tortoise of them all.  He was last seen a couple of months ago heading around the corner towards the beach at Grand Anse but has not been spotted again.  Many groups of volunteers have scoured all the accessible areas of the island but it seems MacGregor has gone into hiding and doesn’t want to be found!

As an intern here on Curieuse I knew that I would eventually be leading groups of volunteers out on surveys.  My first survey as a leader happened last Tuesday where me and a group of volunteers left base in search of the missing few!

We started off in the mangroves as it was low tide, spreading out to search the area.  With no luck in finding any tortoises there we headed over the hill to the Ranger’s station, where most of the Giant Tortoise population here on Curieuse calls home.    After saying hello to some of the friendlier tortoises we went into the thicker vegetation and boggy areas to the rear of the Ranger’s station area.  We encountered lots of tortoises of varying sizes and temperaments but all of them had their individual ID number painted on their shell in yellow paint, indicating they had all been measured and included in this year’s census. 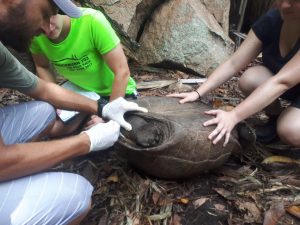 Tortoise 133 having a PIT tag inserted.

We had just reached the far side of the Ranger’s station and we were beginning to think that we were not going to have any luck when I was called over by one of our group.  They had found a tortoise with no yellow ID paint on its shell.  Tortoises can wash or rub the paint off their shell on plants while moving around so at first this was what I thought had happened and all that we needed to do was to scan it’s pit tag (microchip) and repaint the relevant ID number back on.  Except….we could not locate a pit tag.

When two staff members also could not locate a pit tag the excitement was growing.  Who was this tortoise?  Estimated at around 20 years old due to its size it was very skittish and evidently not comfortable around humans.  Pit tagging equipment was quickly gathered and after insertion this individual became the 133rd recorded Giant Tortoise on Curieuse since 2013.  Probably born on Curieuse, number 133 as it is now known has probably lived its life in the thick vegetation in the centre of the island, venturing into the open only recently.

A ‘new’ previously unrecorded Giant Tortoise on my first survey as leader – a perfect day! 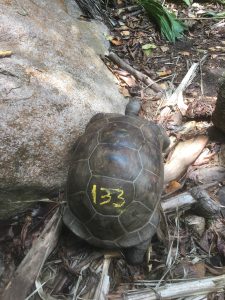 Coral bleaching in Seychelles: What you need to know
Read More
Three types of conservation internships and where you could travel to to get involved
Read More
Three ways to earn your PADI Divemaster with GVI
Read More
Apply Now
Enquire Now
Call Back Request