So, believe it or not, I actually came to Nepal with no intention to trek… crazy right? However, after only a couple of weeks in Pokhara glimpsing the beautiful peaks of the Annapurna mountain range, I realised that I had to take advantage of the landscape around me and, along with 6 of my fellow volunteers, I embarked on a three-day trek to Poon Hill! Everything was really easy to organise through GVI’s local contacts, including hiring hiking boots for those of us who came unprepared. Before we knew it, it was Friday morning, and we were at Gandruk (a couple of hours drive from Pokhara) ready to begin the ascent. The hiking itself was definitely challenging but, even on the first day, the gorgeous scenery mad 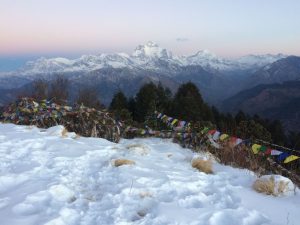 e the experience really enjoyable. Several hours later, we arrived at our first teahouse! Although basic, the teahouses were very comfortable and we had everything we needed available to us. Our guides were also really helpful and friendly, both when we were trekking and in the evenings too. They have a remarkable ability to know just when you need to stop for a rest! It was nice to pass through local communities – we felt as though we were seeing another side of Nepal which we would not otherwise have experienced in Pokhara. Weather-wise, we knew we were taking a major risk by trekking during the monsoon season but, somehow, we beat the afternoon rains and arrived at the teahouses in time to watch the showers from the comfort of our rooms. After two days of hard uphill trekking, on Sunday morning we woke up at 4am to make the final ascent to the summit of Poon Hill. Half-asleep, we were all hoping that the clouds would clear to reveal the stunning mountain peaks of Annapurna South, Dwalagiri and Machapuchare (Mt. Fishtail) and, after nearly an hour of waiting, clutching cups of tea in the bitter cold, they did! I felt on top of the world – literally! I’ve never seen such a breath-taking view before and it was made so much more meaningful by the fact that we had trekked there ourselves. Once we were satisfied that we had taken enough pictures and had gotten over the initial thrill of being there, we headed back to the teahouse to have breakfast and begin the gruelling trek home… 8 hours later… we reached our final stop. I’m not going to sugar-coat it, the third and final day is definitely the most intense (although there is the option to complete the trek across four days if you have enough time). I felt tested, both physically and mentally, as we made our way down a seemingly endless number of uneven steps, but, saying that, as someone with next-to-no trekking experience, I would recommend Poon Hill as a fantastic place to start! Despite the soreness of my legs in the following days, I would do it all again tomorrow! A big thank you to our fabulous guides KB and Tikka for making our experience so relaxed and enjoyable!