The sun hasn’t even come up yet, but there is already a chorus of alarms breaking the morning silence, waking sleepy headed and tired eyed volunteers for their dawn survey. They put on swimmers, boardshorts, bikinis and wetsuit booties; they know they’re going to get wet. The preparation is completed with a head-torch to light the way and a backpack filled with a pre-made breakfast. There is no time to waste this morning, they are working with the tides. The dark but peaceful walk to the turtle pond is done mostly in silence. The volunteers are tired perhaps, but the resulting silence is most probably enforced by the nervous anticipation and excitement of what they are about to see. 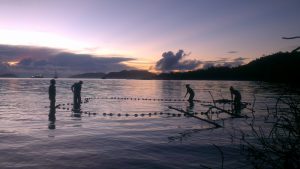 The Sickle-Fin Lemon Shark, Negaprion acutidens, is what they have come to find. It is the hope of volunteers and staff alike that the data gathered from catching lemon shark pups can be used to build the knowledge base of the Curieuse population, create a database of growth rates and population movements over time, as well as study the effectiveness of the turtle pond and accompanying mangrove forest as a nursery ground for shark pups. Ultimately the data can inform Curieuse Island National Park management practices, heightening protection standards and improving the population health of a desperately needed apex predator and keystone species of the coastal ecosystem.

The methodology follows a standard catch and release scheme. Volunteers use seine nets (which they graciously contributed many hours to fixing) and gill nets as the main entanglement devices. One line floats on the surface while the other sinks to the sea floor. A fine mesh in between stretches for approximately 25 meters, ready to entangle any sharks passing by. Placement is critical. It has long been believed that shark pups use the turtle pond and mangrove forest in particular as a nursery ground, free from attacks from larger predators. By stretching the nets parallel to the mouth of the forest,

At this point the volunteers are set up and it only takes 10 minutes before the call of “Lemon!” (shouting shark is considered to be an adverse tactic at dawn and dusk) can be heard across the waters. A dip net scoops the pup for transport, and he or she is ready to be ‘worked up’. If not already, the shark will be PIT tagged, but the scanner emits a beep, and they know it has been caught before. Regardless, they are shown through the various ways to measure the sharks. Sharks are measured, weighed, sampled for DNA and noted for anything of importance before being released. The readout from this shark indicates that this is his seventh time being caught. 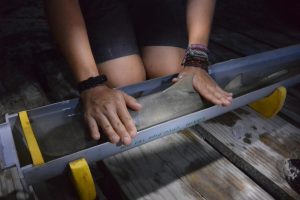 As thrilled as the volunteers are to catch their first shark, they are even more delighted to see it released, free to move about and contribute to the local population of Lemon sharks, a population they will continue to study, ever hopeful that their early morning sacrifices and perseverance can be a chapter in the story of turning the tide on shark perception and worldwide health.