This weekend a group of 7 of us decided to visit Cousin Island; an Island just off Praslin and a nature reserve for turtles, the Giant Tortoise, and several species of rare and endemic birds.

Having heard so much about the ground nesting birds and how close you can get to them from Pete (a GVI staff member), as well as the Wright’s Skink- the largest of the skink species, it sounded like an island I had to visit before leaving.

The trip over to the island took about 15 minutes from Grand Anse on Praslin, it was a lovely day and the water was so clear you could see the bottom of the ocean floor for the first quarter of the journey. Before even reaching Cousin we were seeing various species from the boat, Lisa spotted dolphins, and at one point we were surrounded by batfish. It turned out that we had arrived half an hour early (the island wasn’t open to visitors until 10.00) and during the half hour wait we watched the fish around the boat and wished we could have gone snorkeling, the water looked so enticing and clear, and the fish so large and beautiful. 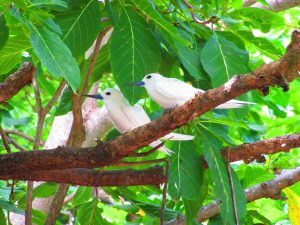 At 10.00 it was time to swap boats and be picked up by the staff of Cousin Island- no boats but theirs are allowed on the island and the landing is very specific. The shoreline is so steep there is only one way to approach it… At a decent speed and driving straight at the beach! Having watched the staff arriving in their boat and witnessing the speed and skill of the driver; and the James bond style landing, we of course couldn’t wait to be on board for our own approach. However, it seems that they are more daring with only staff on board (which is as to be expected) and our landing was less dramatic than we were hoping. 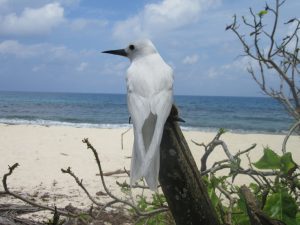 Once on the island we paid the entry fee of 500scr and gathered at the entrance to await the arrival of the rest of the tourists. All visitors were split into either French or English speaking and the tour began. Before we even left the waiting area we had already spotted several Fairy Terns sitting in pairs- they mate for life and are adorable to watch together, snuggling up or grooming each other. As we walked further into the tree’s our guide Alex pointed out the nesting White-tailed Tropicbirds that could be spotted in tree roots or hollow logs. We also saw several juveniles at various stages- between a few weeks old to a couple of months- so fluffy! We saw the endemic Seychelles Warbler, as well as the rarest bird in the Seychelles- the Seychelles Magpie Robin. As I’d hoped the Wright’s skink could be spotted along the route darting through the leaf litter and across the rocks, it’s about three times the size of the Seychelles skinks we get so much of on Curieuse. The walk took about an hour and finished with a wander along the vegetation line by the beach. Alex told us about the turtle population here, about 700 nesting Hawksbill Turtles and 10 Green Turtles- which are much more rare and endangered in the Seychelles.

All in all I really enjoyed seeing the island and the species there that can’t be found in any other part of the world. Definitely worth a visit!