On Wednesday (July 20), our group of volunteers and staff travelled to Praslin where we conducted a beach clean along two of the Island’s southern beaches. The goal of this trip was to reduce the harmful effects that the southeast monsoon causes on both the appearance of these beautiful beaches and the habitats that the area supports. Also, we aimed to raise money for the SSPCA (Seychelles Society for the Prevention of Cruelty to Animals).

To prepare for the beach clean, we divided ourselves into three groups based on age, each with three volunteers and one staff member. The youngest volunteer group was called the Eagle Rays, the second age group was the Lemon Sharks, and the oldest members were the Old Tortoises. We challenged each other to see what group could collect the most bags of trash and recyclables. In addition, we decided that the group that found the most obscure item of the day would be rewarded by a two trash bag bonus at the end of the day.

When we arrived at the first beach, we lined up at one end of the short beach and when one of the staff members said GO we were off to the races. Some sprinted down to the end while others fought over the bundles of trash that were scattered along the first sections of the beach. After the first beach was clean, each group was tied with a total of 6 full bags of rubbish collected.

The second beach was much different. Not only was it about 5 times the size of the first, but the amount of trash that had been washed up by the sea was staggering. Nonetheless, we began tackling the challenge and filling bags at a rapid pace. As we climbed through thick sand dunes full of sea grass and vegetation, we found thousands of trash items including plastic bottles, Styrofoam, cardboard, flip flops, clothes, metal, aluminium, and much more. At the end of the day, we collected a total of 27 full bags of recycling and trash. 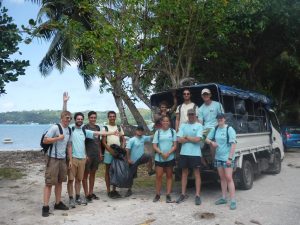 When it was all said and done, the Lemon Sharks collected the most full bags, but the Eagle Rays found the best obscure item, which was a strange metal thing that looked like it fell off of a space ship and it is not yet known what it actually is. Other interesting items included an anchor, a life vest, an inflatable alligator, multiple car parts, and a smashed house cat.

The day turned out to be a great success overall. We exceeded the amount of trash that we expected to find and made a serious impact on the appearance and health of the beaches. In addition, a local couple stopped to ask what our group was doing, made a very generous donation to our cause, and even offered to help with the next beach clean. Although we all went home quite smelly, we had a great time and were very pleased with the impact we made on the local community and environment.