Birds of a feather: a “big day” in Tortuguero National Park 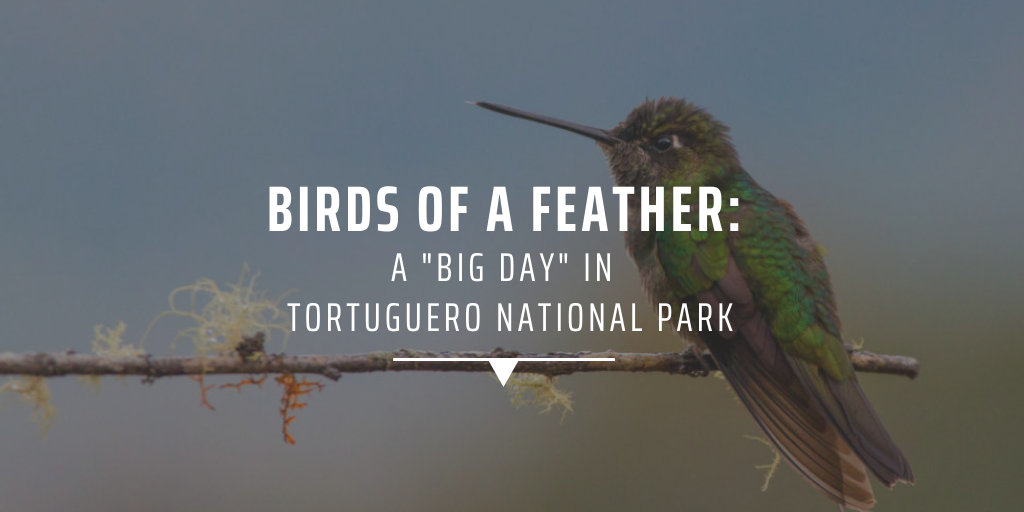 A twist on the “big year” competition allows citizen scientists to add capacity to a wildlife expedition in Costa Rica. It started with a little friendly rivalry – all in the name of conservation research, of course.

Gliding down the canal aboard a canoe, I fantasise about jumping into the cooling water. The long river snakes through the primary rainforest, like a red-tailed boa escaping our paparazzi-esk intrigue.  Today I am on a mission.

Thanks to some keen campfire chat a few nights ago, I found myself front and centre vying for the prestigious title of “top birder of the expedition”. Taking our lead from the “big year” competition, myself and another volunteer are engaging in an extreme citizen science challenge in the name of adding value to conservation research.

The “big year” challenge is a competition to record as many bird species as possible within a calendar year, and is well known among keen birders. It can be set within any geographical bounds and evidence of each species encountered must be provided, of course.

In this case, our challenge took place over 12 weeks and was set within the bounds of Tortuguero National Park, Costa Rica. 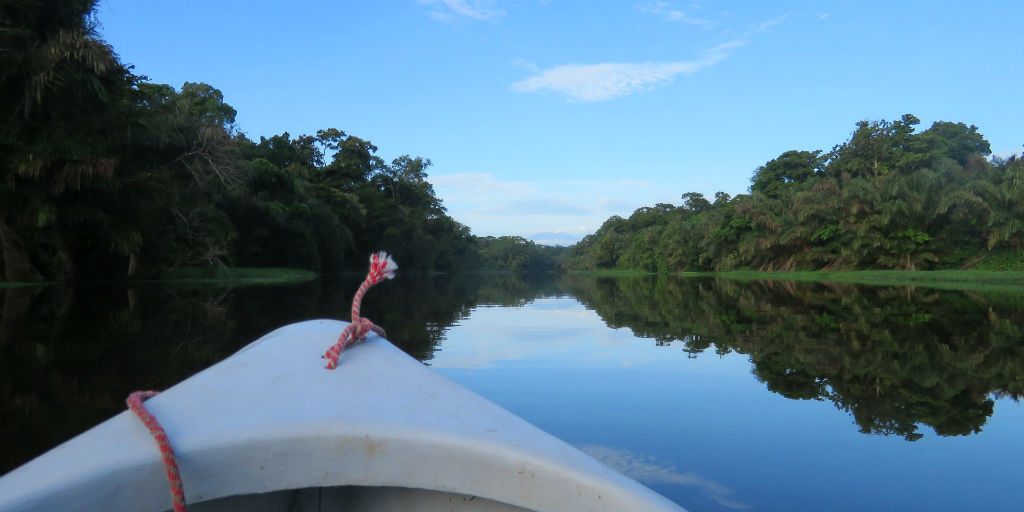 Welcome to the Costa Rican jungle

Having recently arrived at GVI’s Jalova conservation research base, I had spent the last few days getting to know my fellow volunteers. Surrounded by like-minded people, you quickly find somebody with similar interests.

Chris, from the United States, and I, are both bird enthusiasts. We arrived wanting to tick off at least 100 birds during this tropical adventure to a biodiversity hotspot. A challenge set by the other volunteers saw a competition declared, and it soon evolved a life of its own.

In any other situation, I am sure this would be considered giving in to peer-pressure. But what’s an adventurer without an arch nemesis, hey?

Only in this case, we are both the good guys. I guess it would be like Indiana Jones and Lara Croft competing for the same artefact.

The adventurer who records the most bird species by the last day of the expedition wins. 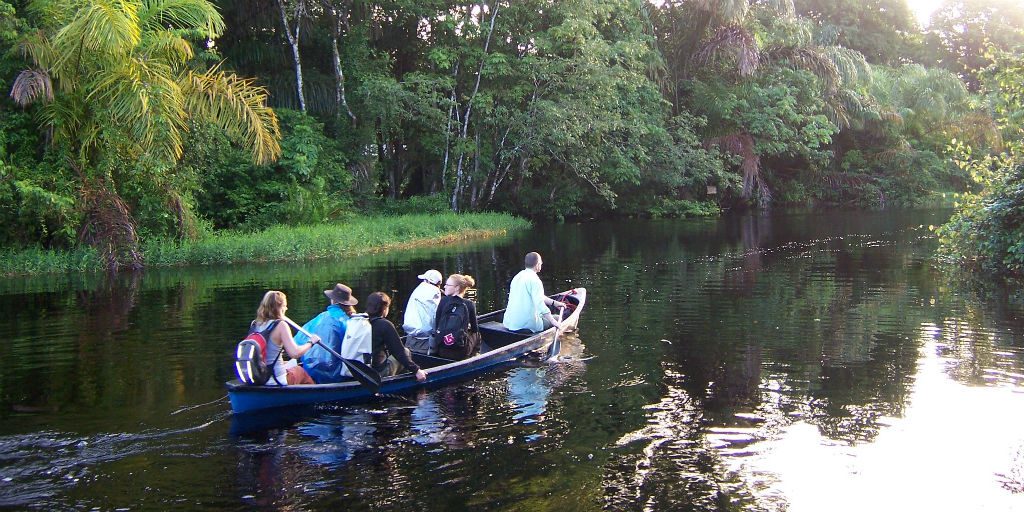 “In the greatest adventure story this year, Indiana Jones and Lara Croft are in a race against time to save the endangered species of Tortuguero National Park. Who will prevail? This action-packed thriller is a must-see –  five stars!”

The cradle of life: searching for ecological indicators in Tortuguero

Before dawn each morning, the call of great tinamous echoes hauntingly throughout the rainforest. I love the sound – Tortuguero National Park’s alarm clock.

Today is a big day. We are getting started with a small group canoe survey along the canal, and recording as many bird species as possible. It’s the perfect way to get ahead of the competition, since Indiana Jones is on a different assignment today.

One of our program partners in Costa Rica, the Ministry of Environment, Energy, and Telecommunications (MINAE), has determined 30 species of aquatic birds to be key ecological indicators. 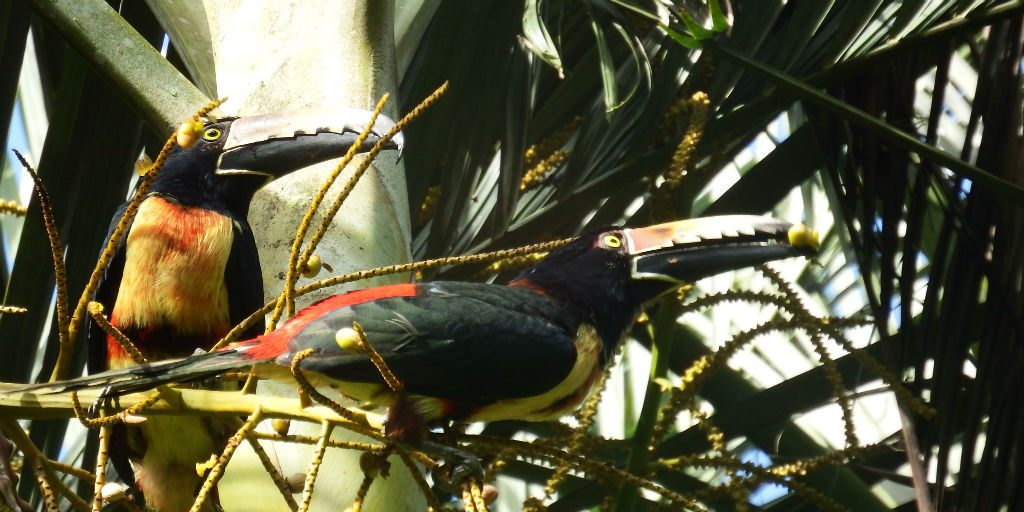 Ecological indicators are living organisms that have links to many other factors within its ecosystem. They are labelled as such because if one is not doing well as a species, it’s usually because an environmental impact of some description has placed the ecosystem under stress.

Ecological indicators have high ecological value. If one is struggling, that creates further pressure through a domino effect within the ecosystem. Monitoring these particular species can give scientists an overall insight into how the ecosystem as a whole is functioning.

It would be great to spot a few of the 30 today.

Rollin’ on the river: birdwatching at the water 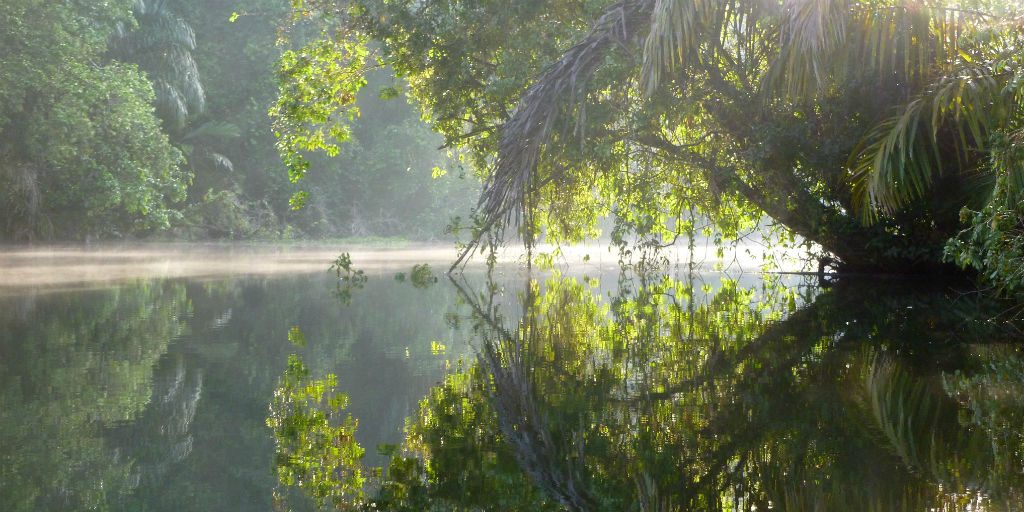 There is such variety within the aquatic habitats of Tortuguero National Park. This diversity in habitat attracts an array of species and is part of the reason the area is considered a biodiversity hotspot.

As we navigate a meander, an open area of the wider canal provides a great opportunity to spot some of the larger or less agile birds that are not quite at home in the dense understory of the rainforest.

I point excitedly as a cattle egret flies over head, with its stilt-like legs extended behind, and long neck tucked back – like a snake coiling in preparation to strike. Its call reminds me of somebody squelching by in wet flip-flops. It is one of MINAE’s key 30. Check! 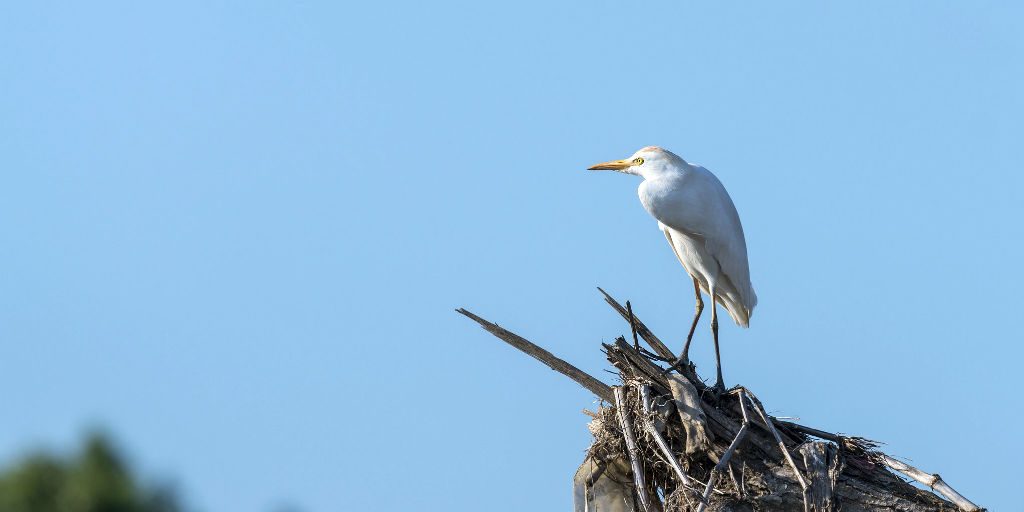 The vegetation leading back from the water’s edge is lush and dense. I picture myself in a safari suit, stocky binoculars dangling from my neck while I duck and weave and crane to get a glimpse of the canopy.

Protruding at various intervals, the naked spikes of dead trees are a favourite haunt of raptors, such as bat falcons and American kestrels.

On the water are dark anhingas drying off on logs with their wings outstretched. But be careful of the logs with eyes, guys. The anhingas share the sunshine with black river turtles.

They may not be birds, but I still add the sighting to the list of the day’s treasures. Every species, bird or otherwise, that we can identify with absolute certainty is added to a database. These records assist the project partners to compile accurate environmental impact statements and make critical conservation decisions. 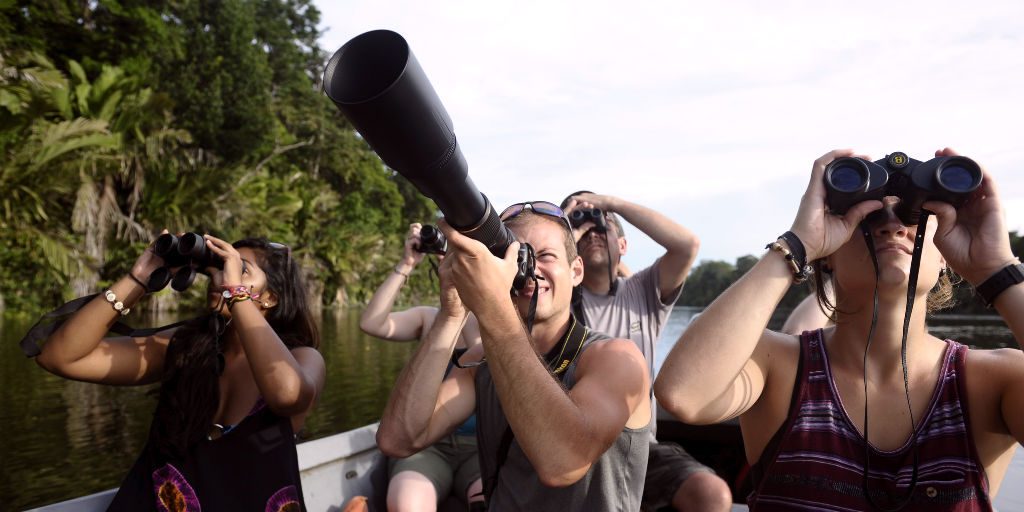 Leaving the canoe behind for a moment, we sneak carefully into the marshes of the lowlands, which are teaming with waders. A white-throated crake clucks as it dashes out from underfoot. I almost jump out of my skin in fright before casually reminding myself that Lara Croft doesn’t scare so easily.

It’s not even midday and I have compiled a total of twelve birds and one reptile on the list so far. But I am keen to grow it even further. I wonder how Indiana is getting along?

Lunchtime is spent in the humid shade of the forest, chatting amongst ourselves about our discoveries so far.

A white-headed capuchin ventures lower in a tree to give us a piece of his mind. Screeching and waving his arm, he then turns back up the branch only to double back and emphasise his point. We giggle with surprise before pushing on with the quest.

If you keep your jungle eyes peeled and your ears open, the rainforest has so many secrets to share. With the vision of a peregrine falcon, you may be able to tell the difference between a branch and a great potoo. And it takes a bit of practise, but if you listen closely you soon get to recognise the unmistakable sound of a hummingbird in flight as it busily zips about. 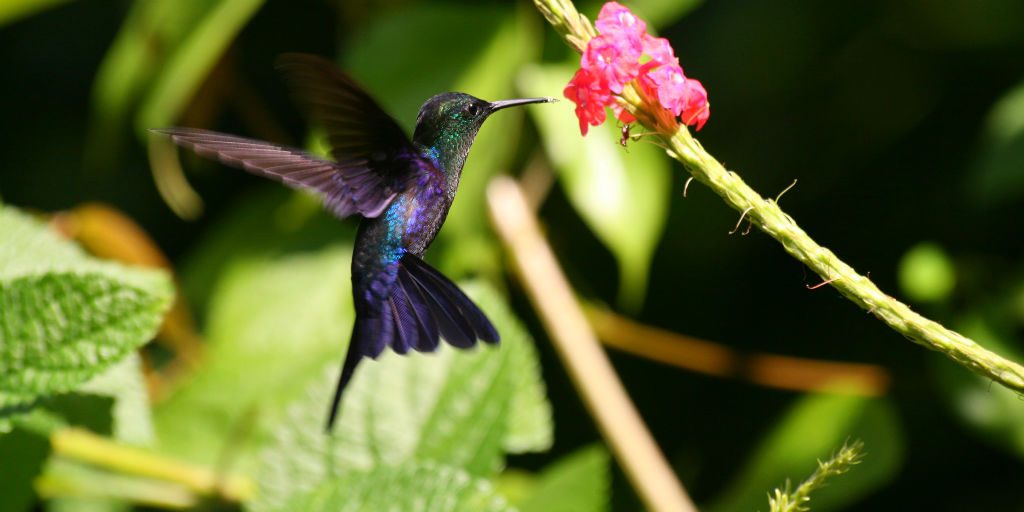 Off in the distance, a pale-vented pigeon asks: “who are you?”

Well, I’m glad you asked. Lara Croft at your service.

There isn’t much wind in the rainforest, and whenever it does visit, it often lasts all of a few seconds, followed by a downpour 30 seconds later. Any other time, if you hear the trees rustling, it is probably birds or monkeys, so look up.

Today it was definitely birds. They’re keel-billed toucans, the iconic bird of Costa Rican ecotourism, messing about in the canopy in search of fruit. 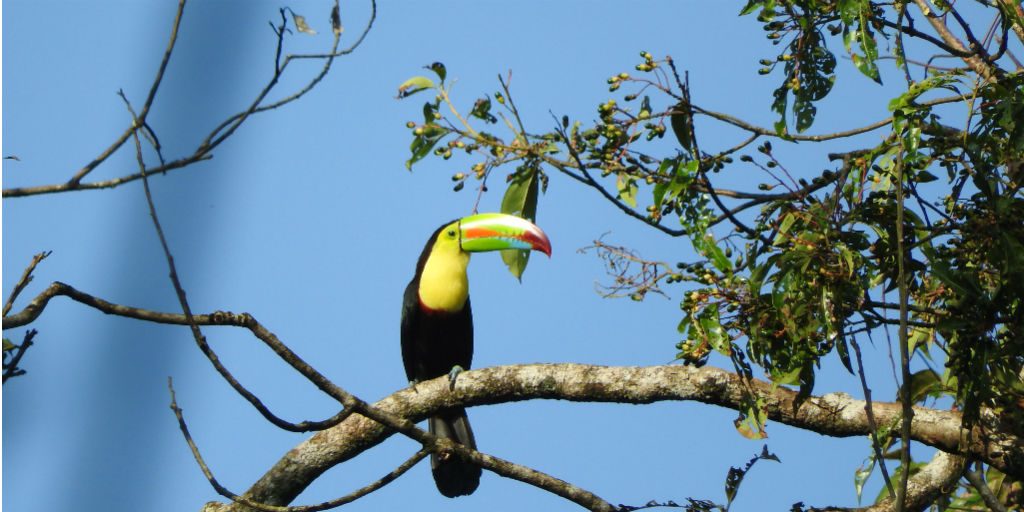 One of the group nudges me and points out a white-whiskered puffbird observing us quietly.

When I first saw a puffbird in a book, I thought they could not possibly look like the drawing in real life, but they really do. They look like cartoon characters with their large eyes and heads that seem out of proportion with their body.

As a dot-winged antwren gleans in for a meal of insects, we are reminded that it is time to head back to camp in preparation for dinner. “Who’s hungry?” I ask. 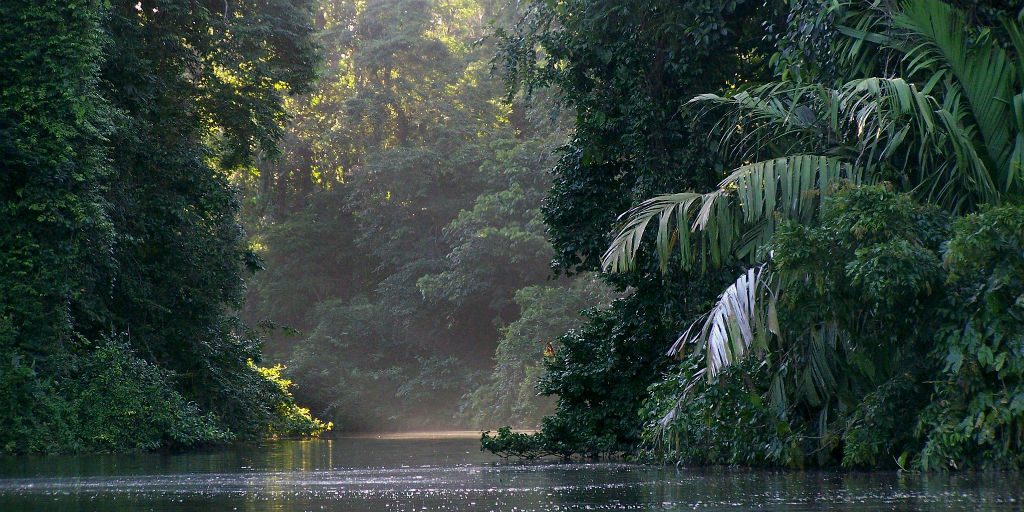 Citizen science at sunset, and long walks on the beach

Dinner of rice and veggies in red sauce is a chance to catch up on everybody’s day of adventure. Indiana tries to casually interrogate me on my discoveries, but I’m keeping my birdwatching tally top secret for now. The day isn’t over yet.

With dusk not far away, a small group of us venture onto the beach for a night turtle survey. Gregarious mealy parrots glide into the trees, settling in for the evening. On the sand, a common black hawk is about to take out a restraining order on some blue-gray tanagers. 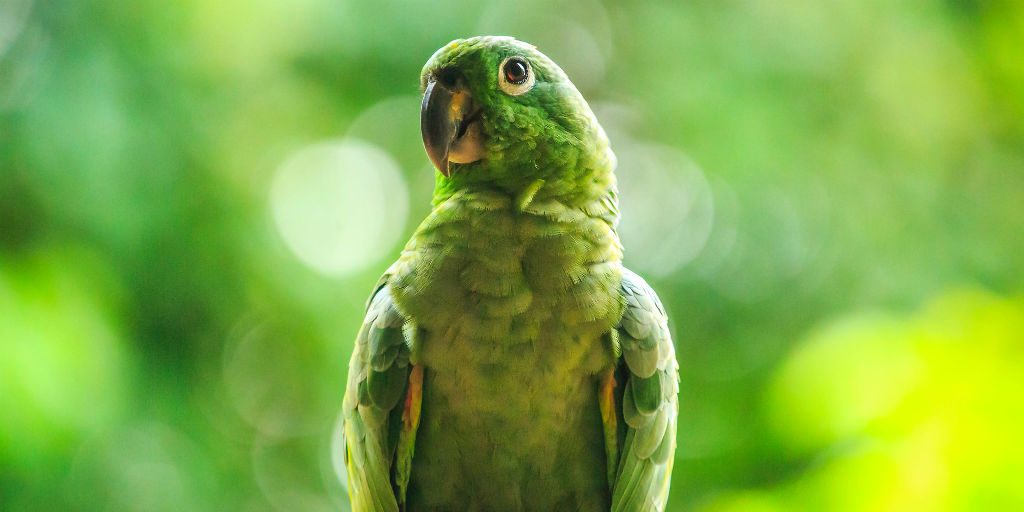 During this afternoon and evening, I’ve added thirteen more birds making the day’s total 25. I’ll wait to reveal my list and compare notes with Indiana over breakfast tomorrow. That will give us a chance to add our citizen science to the program’s database.

As we finish off for the night and head back to base, a deep growling descends from the thick of the forest. Sounding like some undiscovered rainforest monster, it can be a scary noise if you don’t know the origin. 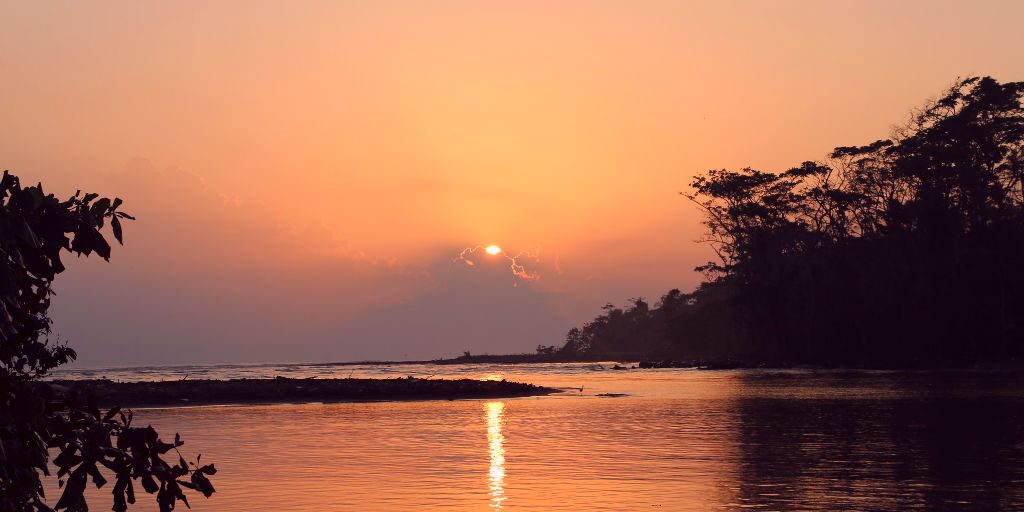 Don’t worry, it’s just the pootoo finally giving up on the game of hide and seek. I hope you’re not afraid of the dark. Sweet dreams.

Why not join GVI in the field and create your own “big year” competition? Citizen science, through birdwatching or other means, is a great way to add capacity to conservation research. And who knows, you might be able to add a new species to the list.

Life on land: Why safeguarding the environment is so important
Read More
The Most Illegally Trafficked Animal in the World You Haven't Heard About
Read More
How to cultivate environmental awareness in schools
Read More
Apply Now
Enquire Now
Call Back Request