From the 25-29th August, two long-term interns, Ally and Tiffany had organized a camping expedition in the forest for their group project joined by two staff members, myself –   Megan (Science Officer) and Sulaiman (Field Staff) accompanied by two locals from the village. Group size was kept small in order to increase our chances of nocturnal animal sightings with minimal noise disturbance.  On the first day however, a large group of volunteers joined us to help set up camp and and to learn how to set the small mammal traps, which Sulaiman had spent the previous weeks making. Our camping location was a 1.5 hour hike into the forest in a cave overlooking a mountain stream. Our daily schedule involved setting small mammal traps each evening in areas where other animal sign was evident, for example, civet tracks or scat. 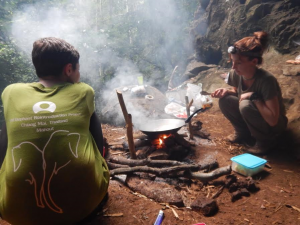 Interns Ally and Tiff setting up camp in the forest.

In one area we found pangolin tracks and scat – very exciting to know we have this endangered species in the area. The species found in the Northern region of Thailand is the Chinese Pangolin (Manis pentadactyla) which is threatened by hunting and illegal trafficking for use in traditional Chinese medicine, and of course due to threatened habitat and deforestation. We hope to start using camera traps in the future to capture these shy and elusive creatures. 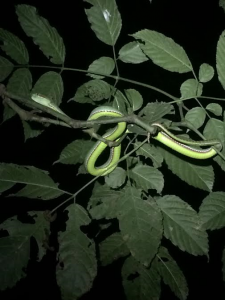 This Pit Viper was just one of the many species observed.

Every night, from 10pm to 1am, we would explore the forest to see what we could find. We found two different bat species in the caves, four different frog species, snakes, birds and although we could hear civet calls we weren’t fortunate enough to make a direct observation.  We also found some baby bush rats that had been abandoned by their mother which we fed and gave milk for a few days until they were strong enough to be released.  Each morning at 4.30am we would make our way to the traps to photograph, measure and release what we had captured.  Unfortunately, despite using a variety of baits, including: banana, corn, peanut butter and fish, we didn’t catch anything.  This was most likely due to Buffalo being in the area on two of the nights.  Next time we hope to set at least 30 traps and conduct surveys over at least one week or more.  In such a highly disturbed area this lack of capture is not surprising, the animals are likely to have become very elusive and wary of human smell and stay clear due to years of, tree-felling, hunting and foraging in the forest by local villagers. 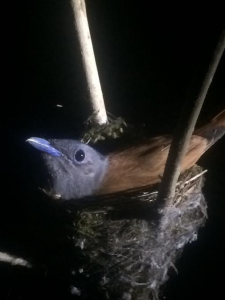 Nesting bird settling down for the night on her clutch of eggs.

On our final day in the forest as we were slowly packing up our cave, Ally and Tiffany spotted a group of gibbons in the trees directly outside the cave entrance. There were four-five individuals and they vocalized for at least 40 minutes. One female had a juvenile in tow which was lovely to see. We had spent so much time searching the forest and on the last day they came to us!   The remaining volunteers came and joined us for a barbeque lunch in the forest and to spend some time with us so we could explain what we had been doing and what a great experience it had been.  Although we didn’t capture any small mammals it was a successful expedition due to the civet and pangolin tracks and gibbon sighting.  We will now be able to develop our research objectives in the future based on the knowledge we gained during this expedition.  Furthermore, if we can find more evidence of endangered species in the area this could lead to developing collaborations with government agencies, such as the Forestry Department, to protect more forested areas in the area.