The Tortoise and the Scare

As my time in Curieuse and the Seychelles comes to an end, a fellow volunteer asked me what I would miss most after I have left. Whilst I hadn’t really thought about it before, I knew the answer instantly – The Aldabra Giant Tortoises. These massive, friendly reptiles are scattered throughout the island and I have had the pleasure of spending a bit of time with them almost every day! Each tortoise seems to have their own personality, with some they will slowly walk over to you for a neck scratch and others will hiss or growl when you walk near (these ones have no interest in being petted.) We even have a couple of tortoises who live on base. McGregor and Obama. 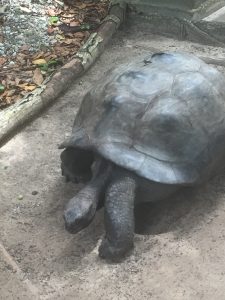 McGregor is one of the largest tortoises on Curieuse and whilst he is very friendly (especially if you have a nice banana skin for him) it is Obama that gets the most attention. Obama is the most entertaining tortoise you could ever meet. He is constantly making a mess of the staff house porch – He likes to use the foot wash bowls as his personal drinking water or alternatively (apparently if he isn’t thirsty) he just likes to walk through them, flooding the area in the process. Recently, once of the Science Officers, Clare, noticed Obama heading towards a foot basin and quickly rushed to fill a separate giant bowl from which he could drink. Unfortunately Obama is not the most graceful tortoise and in the process of getting into position to drink, he put one of his huge feet onto the rim of the bowl, catapulting the contents back into his face and giving him a fright. This resulted in him launching himself forward (possibly the quickest a tortoise has ever moved) and head-butting a wooden post. He then skulked off looking very shell shocked! 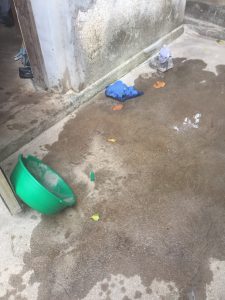 Despite the very light hearted nature of my story there is a more serious side to the tortoises on Curieuse. These lovable animals have only been on the island since 1978 after being introduced from Aldabra. Whilst the numbers of remaining adults is unknown (sometimes they go into the ocean and float off to other islands or less amusingly are poached) there is a tortoise monitoring project of the hatchlings. Any hatchlings found are kept at the Ranger’s station in a nursery and their shells are marked to be able to distinguish between each of them. They are periodically counted by the GVI team to monitor the current population and once they are a bit bigger they will be fitted with PIT tags allowing the Rangers to track them more closely once out in the wild and also deterring further poaching. I had the privilege of taking part in one of the hatchling counting sessions and watching them trying to climb up the walls of their temporary pen and falling backwards onto their shells before putting them back into their spacious cages. The work that GVI and the Rangers are doing with the Curieuse Tortoises is invaluable and will mean the future volunteers and tourists will continue to enjoy these magnificent creatures for years to come.