The tourist industry in Thailand has put a strain on the elephant population of this country. It used to be the case that elephants were captured from the wild, often at a young age, and then trained to do tricks or to give rides. Although this practice may still happen in some areas, many elephant owners/camps obtain more elephants through their current elephants giving birth. These elephants born into captivity are very unlikely to ever see the wild. So the kind of camp/sanctuary these elephants are born into, is the determining factor in whether they will have a decent life or not.

The Karen hill tribe village of Huay Pakoot owns around 60 elephants, the majority of which currently reside within tourist camps in Northern Thailand. Renting their elephants to these camps provides a good source of income for many families in the village. Although some of these camps don’t make these elephants perform tricks or undertake in saddle riding, it is the goal of GVI Chiang Mai to provide the best quality of life for the elephants as possible. 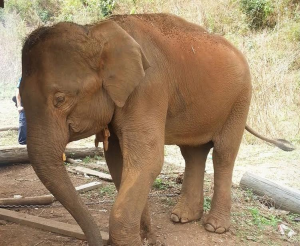 During the last few months, GVI Chiang Mai has been looking to increase the number of elephants here in the village (it can take a long time to negotiate terms). During the month of March, we were able to secure two more elephants; a female called Gureepoh and a male named Dee Dee. It’s great to see these elephants spend more time in the forest, where they should be. Without having to perform tricks or provide exhausting rides to tourists. 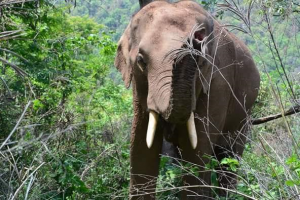 Gureepoh was placed in a heard with Khum Suk, Kha Moon, and Saja (3 older females), Lulu (a juvenile female) and Wan Mai (our baby male elephant). Gureepoh settled into the group pretty much instantly, and is now able to walk in the forest and learn from the more experienced individuals on how to actually be an elephant. When Dee Dee first arrived he was kept more separated from the other elephants, this is because the mahouts wanted to make sure he was settled before introducing him; a male elephant can affect the dynamics of a herd more than a female joining the group. So safety first, especially when volunteers are in close proximity to these giants. Dee Dee, however, was extremely calm and was introduced to the others relatively soon after arriving. The current relationships between the elephants are stable and Dee Dee and Lulu seem to have become good friends!

GVI Chiang Mai want to ensure that as many elephants as possible have the best, most natural, life they can. Apart from helping elephants directly, by bringing them back to the forest, volunteers and interns also learn about elephant welfare and the situation that many elephants, in Thailand, find themselves. This knowledge can be used to educate others and hopefully help people realise that they should not visit certain camps, but instead support sustainable, welfare focused, projects.